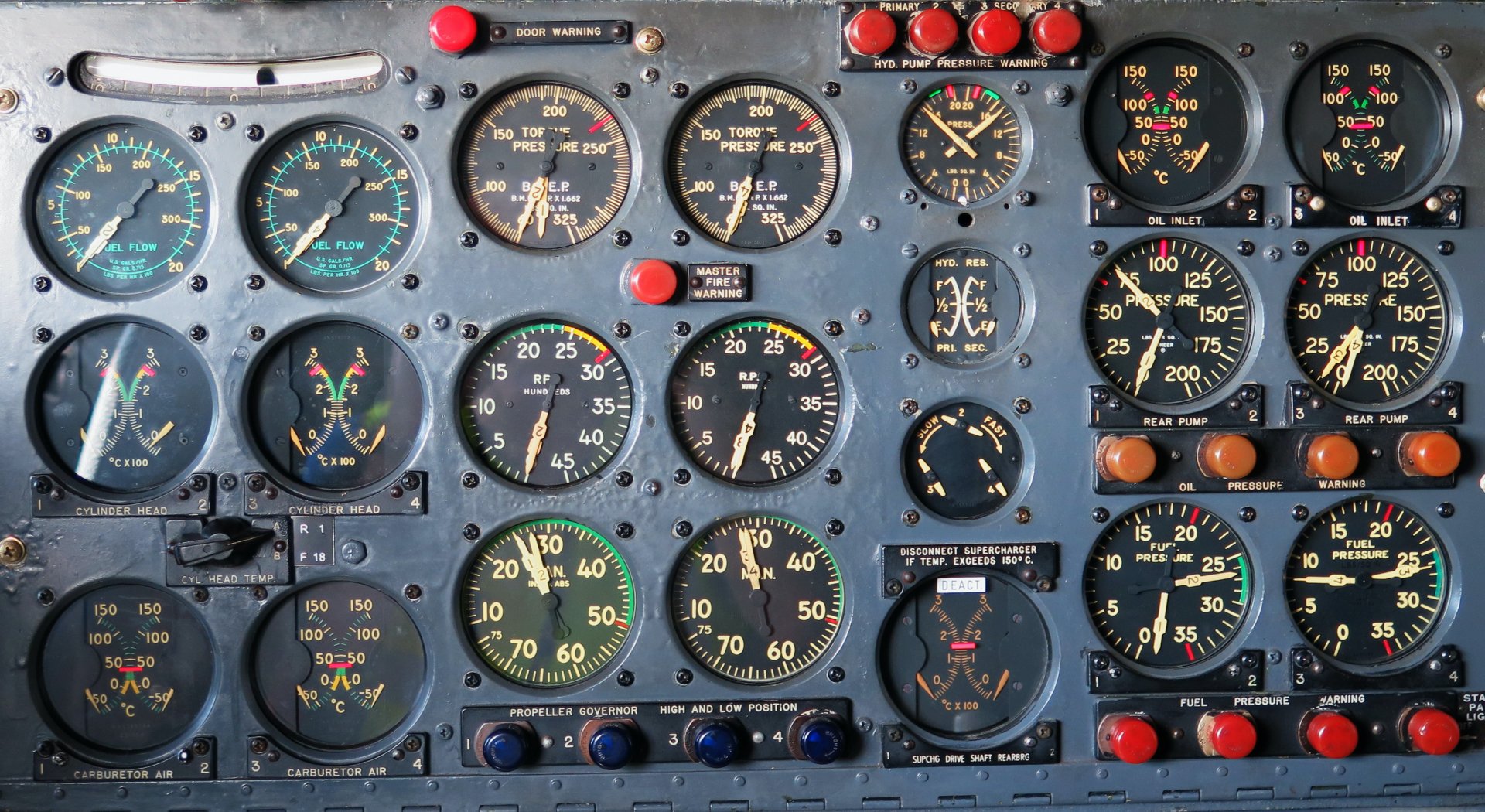 On the dashboard of my factory

After last month, when I wrote about it, we collected a lot of data, from our ERP and MES systems, from our PLCs, and maybe also some additional notes from the people working in a factory. That’s great, isn’t it? Now we can start improving our production facility, be more effective, reduce waste and energy consumption and be best in class.

But wait, where do we start now? This pile of data is no more accessible than the paper notebooks and spreadsheets we collected in the past. Which items do we need to look at to start improving? Did we just collect all this data to only make our problems bigger and even less easy to find? Why did we spend all that money on getting sensors and a data gateway installed, we are not closer to becoming more effective and sustainable at all – we even waste more energy now.

This could be the outcome of a naïeve (not so) smart industry project in a company that is just making its first steps into putting the digital world to good use. A horror scenario for a plant manager and his board of management – spending time and money on becoming more modern and then being left with only more problems to solve. Something that may happen if one blindly follows the advertising of IoT (Internet of Things) and smart data that comes by on the internet and in magazines. As always, technology by itself is not the answer, not even when going for 98 or 100 percent digital solutions. We always need to have a look at what we want to learn about and what we want to improve on.

We don’t need all data for everything, and we don’t need to use all data we have. Instead, we end up with what we had before: metrics or KPIs (Key Performance Indicators) that we want to improve on. I’ve never been a big fan of KPIs, as they are often not as key as we want to believe, and as such become unnecessary overhead. Actually, let’s adopt the term PPI to get rid fo that nasty taste, Production Performance Indicators. It fits more with the domain I’m talking about and it makes explicit what is “key”: Production Performance.
Now of course, Production Performance still has multiple dimensions, like finance, time and resource usage, waste production, so we still have to make choices. I prefer to look at three items when it comes to production performance in general, which can be fine tuned for different industries.

The first one is efficiency. This is one that most people will grasp immediately – it is about optimal use of available capacity and resources. Squeeze as much product out of a system as possible. This is an important PPI, that is also its own pitfall. I’m not going to go over all the details, but we already know since the 1980s that too much focus on efficiency leads to local optimisations and overall failure to meet goals. Using every machine to its maximum capacity introduces bottlenecks and starvation at the same time within a single production facility. So efficiency is important but should be measured across the full production line. There’s a lot to gain there from data provided by each individual machine, each individual production step, and by finding the optimal efficiency across the line.

The second is effectivity. Closely related to efficiency, but not the same. Effectivity is about using all parts of the production line in the most effective way, making it contribute in the best possible way to the overall system and, if you will, its efficiency. Also here, we have to look at the individual parts of a production system as well as at the whole. In an earlier article I used an example where a company scrapped about a ton of steel every week due to a poor setup procedure for one of their machines. That means that effectivity of that machine was 1000 kg of steel (and its processing time) away from what it should be, because of bad setup.

Third and final is sustainability, which ties in directly to the example above. A sustainable factory minimizes waste production and resource consumption. For those in the world of lean manufacturing – indeed both of these things classify as waste. Wasting materials as described above is not sustainable – ruins production, costs money and in a lot of cases also affects the environment in a negative way. Similarly, the same example of wasting 1000kg of steel per week also means that the energy used to process that material (and correcting the machine setup) is wasted.

For each factory we try to help, we try to identify which things they would like to improve in these areas. Sometimes that is very specific, like ‘using less electricity’, or ‘lose less time on production errors/fault/mistakes’.
With those things identified, which are more quantifiable than efficiency or sustainability themselves, we can start identifying which data we need to gather to be able to analyse what part of production is a candidate for change. Sometimes we need data from individual machines, sometimes a correlation between production planning and production output, or material purchasing and production execution.

Once we have this clear, we can identify for each item what we want to analyse. Sometimes so called time series data from devices is sufficient, sometimes we may also want to match this data with data from MES or ERP (production plans, logistics flows) to find out what is not obvious on the surface.

Dashboards, digital displays with any kind of table and graph one desires, help to visualise the data related to selected PPI, and combinations of data that can be used to create new insights.

Just imagine the case of a dosing system that was leading to an undesired waste of material (effectivity as well as sustainability are involved here). The data coming from the machine, nor from the other systems gave any clue as to what was going on. Only after someone realised that the problems always occurred on Friday morning between 10 and 12, and only when a certain class of ingredient were dosed, one that flows quite easily through dosing systems.
That helped a lot, but not enough – the dashboard and available data gave no clue as to what was causing this problem. Only when someone went on to a piece of data from a completely different source the issue became clear. That piece of data was the work schedule of the truck cleaning facility next to the production location. It turned out that on Friday morning, a larger amount of trucks came in for cleaning that during the rest of the week, causing vibrations that affected the dosing system. Enough to cause overdosings, not enough to cause complete failure.
Needless to say that this piece of data was only added after someone went on site in at the dosing system and noticed the vibrations. This proves the need as well as the limitations of having dashboards: they can bring correlations to light, but only to a limited extend. One thing that we’d like to see happen is that some form of AI helps us with that – but also there we have to deal with the fact that correlations may be detected, but with the current stat of AI we may not necessarily also be able to identify the underlying cause.